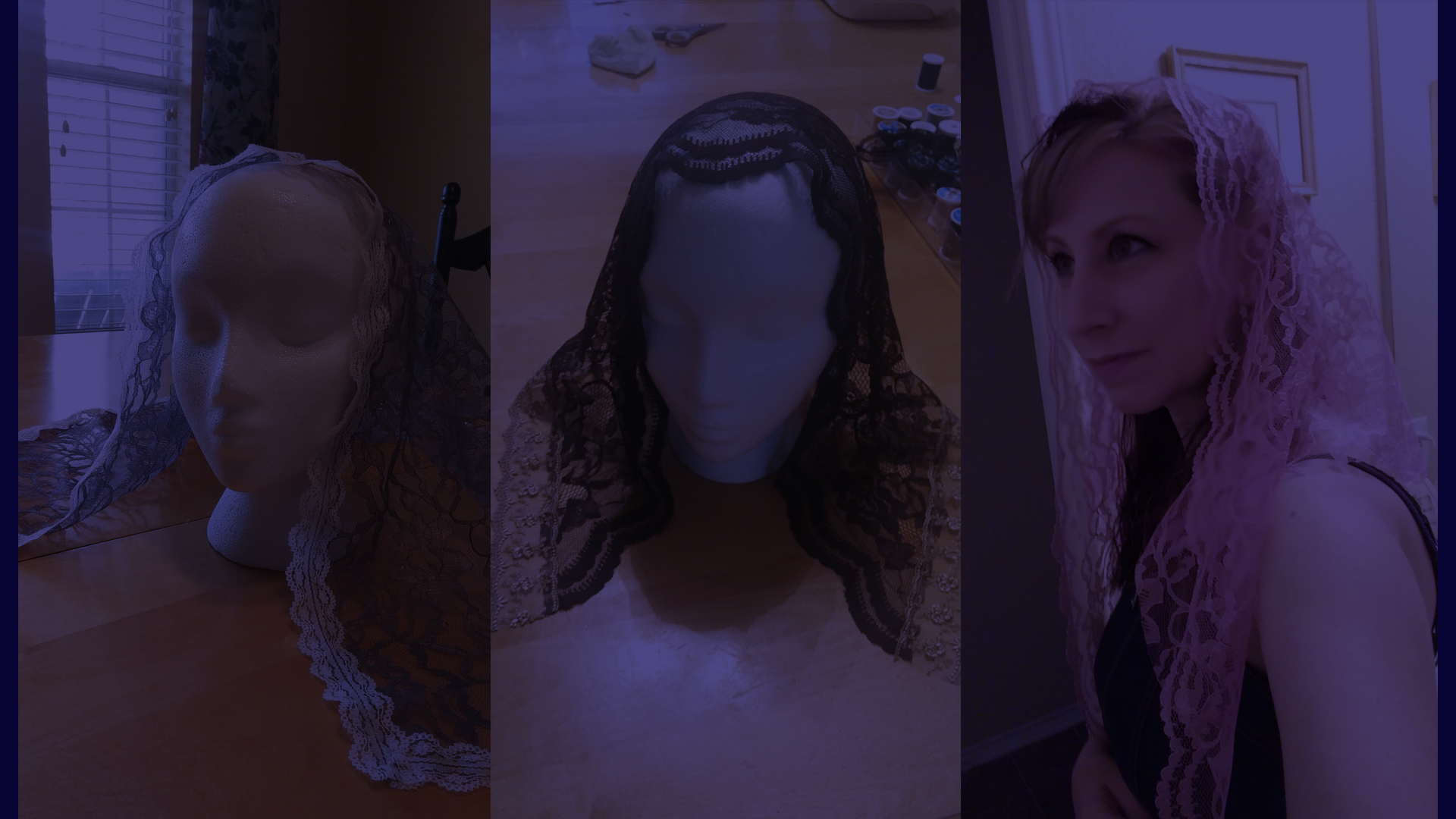 Why I Veil At Holy Mass

While there are many biblical reasons steeped in scripture and tradition as to why women wear chapel veils, each women’s personal story as to “why” is as unique as the women herself who wears one.

I thought a great way to share about veiling is to explain to you my personal reasons why, what it does for me and how it draws me closer to my Lord and Savior through this simple, yet beautiful devotion of love and reverence.

Growing up in a small town in NH, I had two parents, a brother and a house full of love!   I was baptized in the protestant church as a baby, but religion and even any talk about faith was not part of my early upbringing.  As the story goes, one day when I came home from school, I emphatically told my mom, I wanted to know Jesus and I was looking to her for answers.  My Mom took this as a sign from God that he was calling her back to a faith that she once had a burning desire for, and she knew He was calling her to guide the family in that direction too.  She went back to the Catholic Church and found home.  We became members of the church and made our sacraments and attended mass regularly.  Although my mother’s devotion grew and grew, mine slowly, over time, dwindled until it became virtually nonexistent.  But our Lord is faithful, merciful, forgiving and patient, and wasn’t willing to let me go… just like He is with all His children, loving, and always calling his lambs back to the fold, he patiently awaits their return.

Throughout my journey back to Him, He sent me people to help mold me.  It was subtle at first, but I started to notice Christ’s love and light through other’s actions and their examples.  Some would share the good news with me as they continued to water the seeds planted in my heart, while others would pray for the seeds to bloom in abundance. Through it all, I continued to receive teaching and guidance as one by one he continued to send people, from different religious and ethnic backgrounds to teach, mold, and pray for me and with me. He began to open my eyes and soften my ugly, broken and unforgiving heart.   He wouldn’t let me go, even when I tried to resist, and slowly I began to understand he loved me for me, warts and all!

In 2001, I felt called back to the Catholic church and for the first time in a long time, I felt whole.  It was during this time of growing in my Catholic Faith that I was attracted to the idea of the veil, but maybe like you, I was confused by its meaning and wondered if wearing it meant that I was trying to be showy or if women were trying to bring back an old tradition that had no place in the “new church.”  I was also under the misconception that only the most devout wear veils and thought I was not “holy enough” to wear one. (Wearing a veil does not make you anymore holy, as a matter of fact, it makes it even more real that you are a sinner and in need HIS saving grace, but that knowledge didn’t come until much later.) I asked a few questions about wearing a chapel veil to gain more understanding from women I admired at church, but didn’t pursue it further.

I went on my journey always intrigued and admiring my fellow Catholic veil wearers, and even though I felt the nudge to join them many times in this beautiful tradition, I ignored the prompting and continued on my own journey of faith until one day the “nudge” got so strong, it couldn’t be ignored any longer.  I was having a crisis of Faith and I was treading on rocky soil and cried out to the Lord. He answered me in a way that was both surprising and terrifying.

It was spring of 2013. I was angry about many things in life and could not feel God’s presence at that time. I felt like he had left me alone to navigate these rocky days ahead and I was dismayed.  I remember calling out to God and asking what he wanted from me, how could he have brought me back to Him only to leave me when I needed Him most?  I remembered someone that he had brought into my life years ago, who had taught me that when you feel God is quiet it is because “the teacher is always quiet during the test” and it is in those times that, you need to pray for boldness and ask God to increase your faith.  “Pray and ask Him what he is calling you to do.”  So that is what I did.  I Prayed for boldness. I walked by faith and not by sight. I believed he was hearing me even though I heard or felt nothing… I just kept praying for boldness and with blind faith I believed He would show me the way.  After many months of that simple prayer he did show me the way… but now it was up to me to obey.

Due to a career move, our family relocated to TX and we became new members of St. Francis of Assisi Catholic Church. This was not the typical traditional long, cross shaped church I was used to, it was round and had lots of light and lots of parishioners. You could see EVERYONE from wherever you were seated.  It was amazing to be encircled in this Body of Christ in this way, but it was also intimidating.  At this church, unlike my previous parish back home, no one veiled during holy mass so I was shocked with what happened next.  After receiving Holy Eucharist and praying my simple prayer for boldness, I felt the Lord tell my spirit to veil at mass. What??  No one even veils here. This CAN’T be what he is asking me to do. So I ignored him.  After that I started seeing things that would make me think of the command “I think” I received, “to veil at mass.” I asked a few people to pray for me to have clarity, and I prayed too… “Lord, what do you want from me? Help me to understand.” Again, he spoke to my spirit “veil at mass, imitate my mother.”  I tried to pretend I didn’t know what he meant or what he was asking me to do… and quickly thought, I better stop praying for boldness! Deep down however I knew, that little prayer for boldness WAS being answered and he was asking Me to imitate His mother… to be humble of heart and show great reverence for her son on the alter. I was nervous to take this step of faith, but I did it, I stepped out… well sort of… I veiled in the adoration chapel, to get “comfortable.”

It was in the adoration chapel where I finally felt the Lord speaking to me in ways like I had never heard before. I remember entering in the chapel. I was alone, just me and the Lord. It was quiet and the only sound I heard were the harmonizing chimes from outside the chapel window. With a veil on my head and honest love in my heart, I felt his love wash over me and I began to weep. I wept because I was finally obeying and I could feel that the months in the desert were coming to an end.  I had passed the test.  I remember raising my hands in an animated way and saying, “Ok Lord, you got me.  I will be bold for you. And his reply brought me to my knees as I heard him say “Let the eyes of others judge you, as you wear your veil for me.” And so my journey to honor my Lord in this way began and He has opened up new ways for me to fall more deeply in love with the body, blood, soul and divinity of Jesus Christ and remember where I have come from and to whom I belong.

I know a few judgmental eyes have been upon me as I wear a veil, and that is ok, as I know why and to whom I am showing honor to, in my own humble way.  whether it be because they have misconceptions as I once did, or they think it’s a fad or maybe they had a bad experience themselves from being “forced to wear a veil” when they were younger… my prayer is that when they see me, they will be reminded of who THEY are in Christ and who He is calling them to be, and that we truly are, all one Body of Christ.  The great news, however, is the number of approving glances, the audible “thank you for bringing back this tradition” and the ability to share my “why” with so many, far outweigh the number of disapproving and judgmental eyes!!!  So… take heart!  Veil on sisters!!

I will leave you with few thoughts on what wearing a veil has done for me personally.  It helps me to focus on the true presence of the mass.  It helps me to remember that I am a bride of Christ.  It helps me to recognize that I am a sinner and a work in progress, but I am HIS work!!   And finally, it also helps me to celebrate that I am a woman!    I am uniquely different from men!  The veil upon my head does not make me less than or more than, but rather, different than, set apart from and feminine!  And I embrace this gift from God with joy!

Since this new adventure in veiling has begun for me, it has made my heart so happy to see so many other women join me, especially at St. Francis of Assisi. I can only hope that through my quiet example, others who are discerning whether they should veil or not will have the courage to do so too!  So, do I think this “old tradition” has a place in the “new church?”  Yes, without a doubt!  Do I feel like everyone should wear a veil? Well… not necessarily.  I feel the Lord calls us in so many ways to serve and honor Him, it is personal between you and the Lord.  Have you asked Him lately where he wants you?  Are you ready to pray for boldness to find out?  Hear that??  He is knocking on the door of your heart.  He is waiting… will YOU answer?

The Launch of Veiled In Love 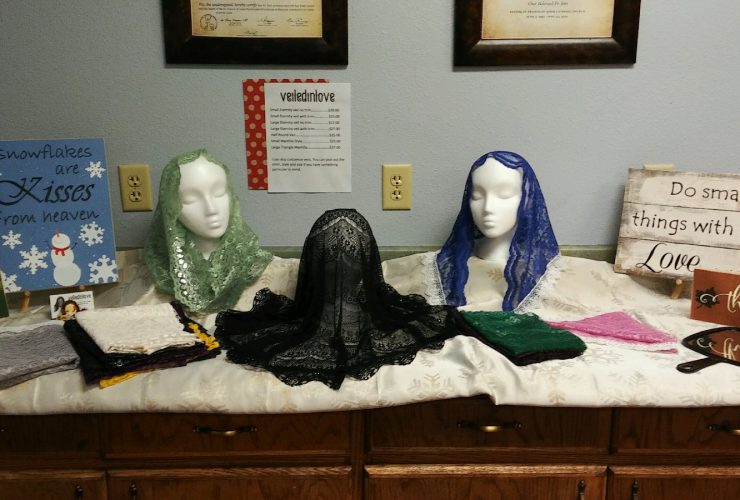 Welcome to the launch of my new website, veiledinlove.com!  This website is designed to be a resource for those who wear veils and are looking for quality, custom-designed, handmade veils.  I also create a variety of other inspired gifts, including hand-painted signs. Check back often for more blog posts and inspired items added to the collection!  Thank you to all those who support me in this journey!